When it comes to leveling up Pokemon at Pokemon Quest, we come across such in-game terms like Power Charms, Power Stones, and Move Stones. If you already started playing Pokemon Quest then after passing the first expedition, you already achieved some Power Stones. What are they, how and why should you use them? Let’s find out together to gain more progress in Pokemon Quest.

What are Power Stones?

Power Stones are powerful in-game items which are needed for leveling up your Pokemon. Your little monsters get stronger after every successful expedition. Completing each stage lead them to more complicated challenges and expeditions. The stronger your Pokemon becomes, the more difficult stages it can pass.

Power Stones are the items that directly correlate with your Pokemon’s evolution. These are the basic Pokemon Quest stones affecting Pokemon health and attacking abilities.

Each Pokemon possesses the Power Charm consisting of Health and Attack Power Stones. There are nine slots by default which can be filled with Power Stones. Red boxing-glove looking slot is for Attack and blue heart-looking - for Health. 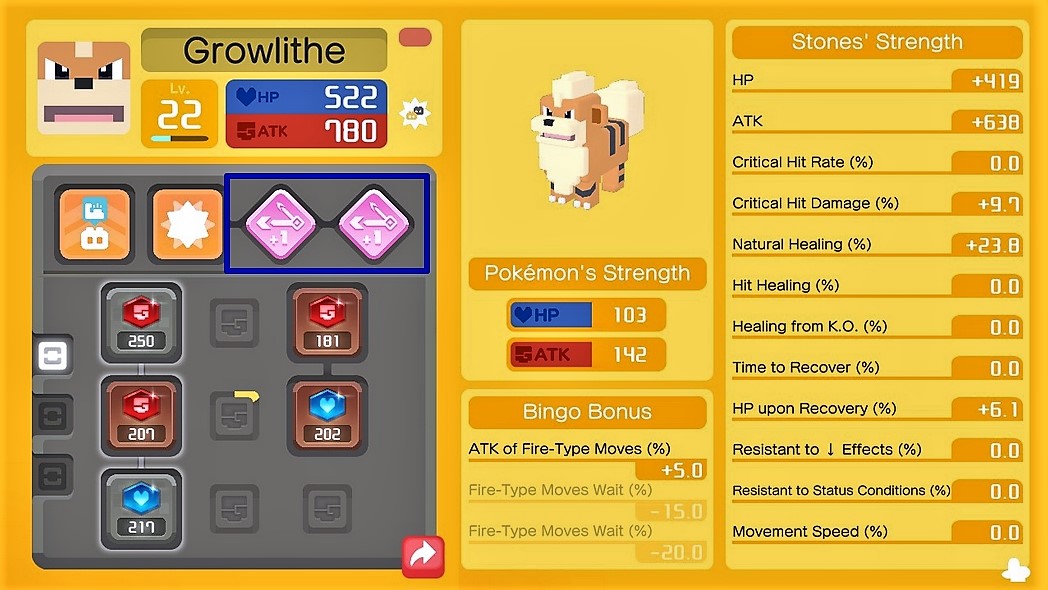 When your Pokemon levels up, the number of slots for Power Stones will increase. In case you build a straight line of Power Stones and thus unlock enough slots, your Pokemon is going to gain some new abilities.

Every Power Stone has its unique abilities, and all of them can be divided by the type. There are bronze, silver, and gold Power Stones. By the type of a Power Stone, you can recognize its value.

How to get Power Stones?

On the Tumblecube Island, there are different areas. Each of them corresponds to a particular game level. Going on expeditions, you move between various locations. After clearing the waves of wild Pokemon, you come back to your Base Camp and equip the Pokemon with the goodies earned on expeditions.

The Power Stones in Pokemon Quest are also gained from expeditions. They are a kind of reward for beating the final boss at each stage. When the boss is defeated, it drops a Power Stone, and your Pokemon can catch it up, and bring it to the Base Camp.

After every expedition, you have to be attentive and check whether you collected all the Power Stones available on this stage. 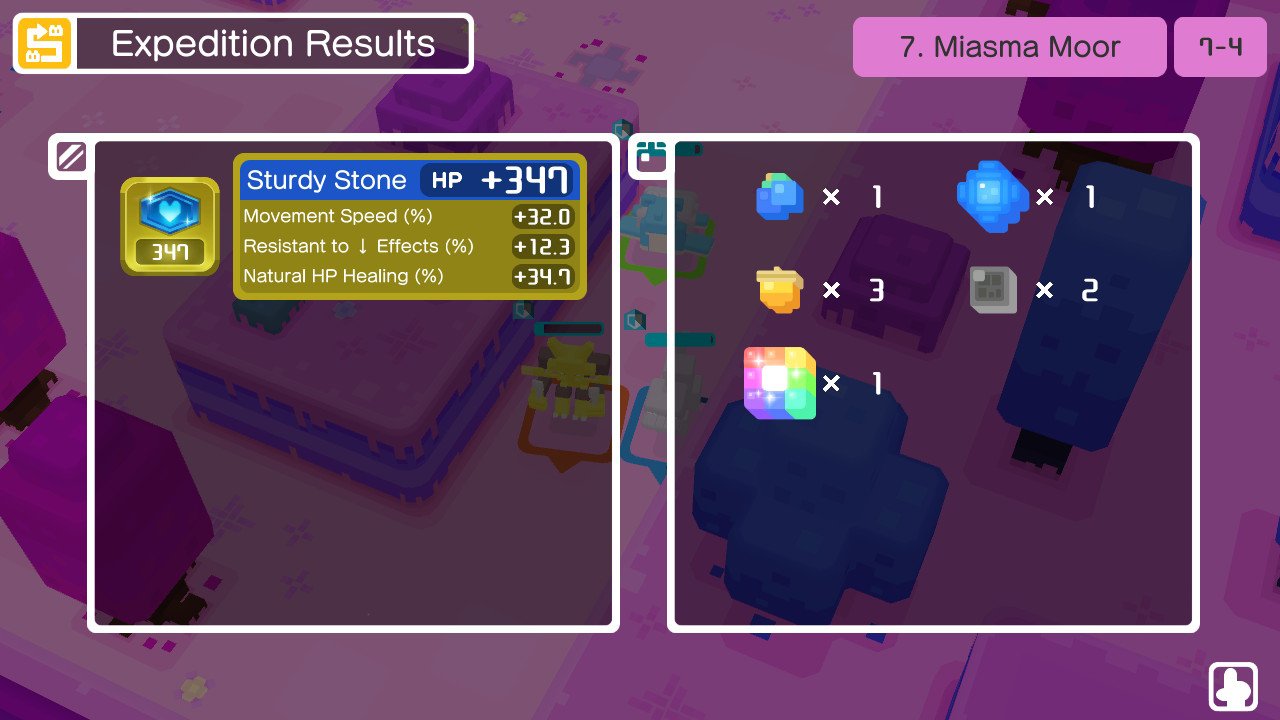 This action is also called farming - it is like a fruitful harvesting after passing a complicated mission. You clear all the waves of enemies and get rewards. Power Stones are among these rewards.

After completing every ten levels successfully, you will also get a special bonus which is called the Expedition Bonus. It promises to bring you a gold Power Stone when you complete the next level.

You can also use PM Tickets to increase the number of Power Stones in Pokemon Quest.

Some of the Power Stones can be bought in the store for real cash money. When buying them, you will get 100 PM Tickets extra as a bonus.

What are the effects of Power Stones? 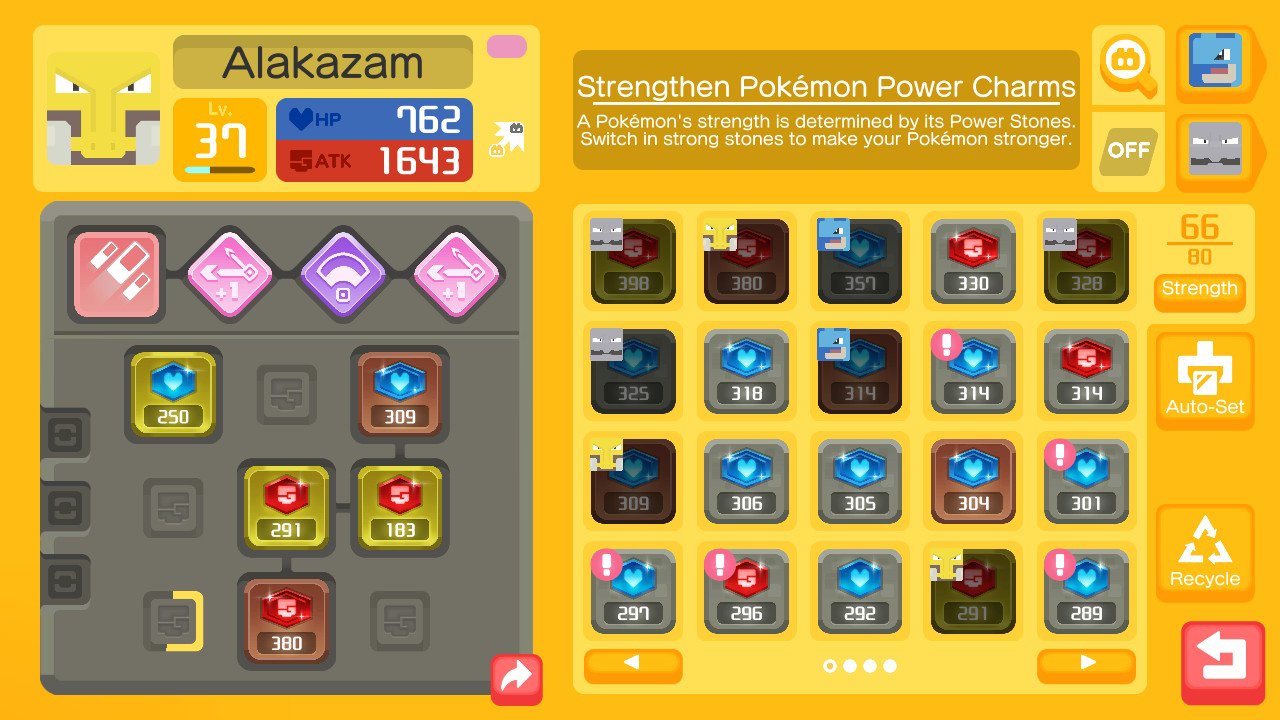 As we already mentioned, each Power Stone is unique. They all have special abilities with the proportion differing between stones.

What are the Move Stones?

There are Power Stones which are extremely powerful, and they are called the Move Stones. They have a shape of a diamond when the usual Power Stones are square-shaped.

Power Stones can only increase Health and Attack of your Pokemon. Move Stones have more various effects, however, they significantly enhance your Pokemon abilities.

Move Stones are rarer than common Power Stones. You can find them passing the game stages randomly or finishing certain quests. You can as well purchase them in the shop for real cash money.

The effects of the Move Stones are described in the table below.

Pokemon Quest First Week Results on Mobile After the first week on mobile devices, Pokemon Quest did an amazing job. According to several sourc... Details Pokemon Quest Decorations Guide Pokemon Quest offers you a bunch of entertaining activities on the Tumblecube Island. Your little Po... Details