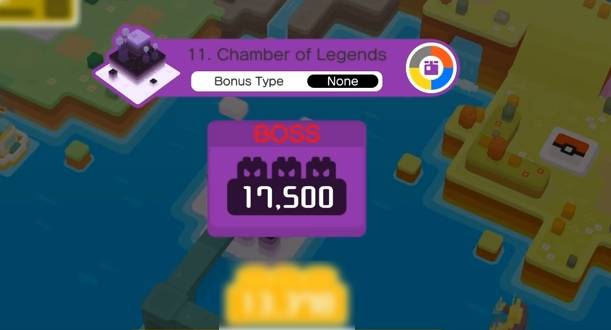 As you remember, the tenth Farside Fjord level ends with discovering the Reverent Statue and opening the Chamber of Legends. That will be your new location for the expedition at the eleventh level.

Tip 1 from Pokemon Quest walkthrough guide: You can use Ditto Ballon’s Effect on your expedition. The Ditto Ballon greatly increases the success rate of Move-Learning Training.

At the beginning of the Chamber of Legends level, your team will meet Mewtwo, the boss who was freed from the room. It expresses the gratitude for long-awaited freedom: “It is thanks to you that I have been freed from the bonds that annoyed me so. I have been locked away for so long that my body feels a bit sluggish. Time to warm up!”

And after these words, you understand that Mewtwo is going to thank not just with words, but with an invitation to become its sparring partner.

Thus you are facing a fighting challenge from the Pokemon boss of the Chamber of Legends. Mewtwo is an extremely powerful antagonist. It is a very special Pokemon because it was created by science and has an unknown origin and unclear evolution. It belongs to a Psychic-type Pokemon. Mewtwo resembles both a human by its bipedal feature and a cat for its feline features.

It is hard to beat Mewtwo. Though you should use Bug, Dark, and Ghost types of moves to be more efficient in this fight. Your Pokemon can be all tired out with struggling Mewtwo. So you will need to once again start your Expedition.

Tip 2 from Pokemon Quest walkthrough guide: You can use PM Tickets to collect the items you’ve found along the way.

The Mewtwo battle must be one of the most frustrating boss battles in Pokemon Quest, so you need to be attentive to lots of aspects. Pay special attention to the Pokemon suited to be in front.

Tip 3 from Pokemon Quest walkthrough guide: Pokemon at the front of your team are easily targeted by enemies. It’s probably best that they have more HP than ATK.

Tip 4 from Pokemon Quest walkthrough guide: Check out Team Members’ Moves. The balance of which moves your Pokemon on your team know is also important.

The more times you try to start your Expedition from the very beginning, the more crazy attacks of Mewtwo you get.

When Mewtwo is finally beaten, it tells your team members that owe for liberating. We can stop here for now. And thus all expeditions on the Tumblecube Island have come to an end.

Mewtwo also warns you that this island has more secrets than just the Chamber of Legends. Even Mewtwo does not fully understand it, but it is a mysterious place that has terrain that changes each time one visits it. So the game is not over yet...