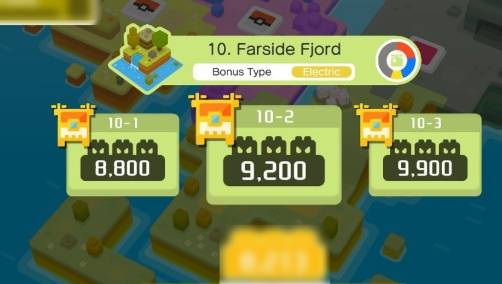 You must already know that a Pokemon strength is determined by its Power Stones. You can strengthen Pokemon’s Power Charms to make it more efficient in the expeditions.

If you are strong enough, meaning your Team Strength is 9,200 at the second stage of the Farside Fjord level, then you will be able to pass this stage. There are four waves of enemies Pokemon on it. The final one prepared for you an encounter with Seadra.

It’s a Water-type Pokemon which evolves from Horsea. Its appearance resembles a seahorse. Its color is blue, and it can be both male and female species.

Seadra habits among the corals. So sometimes people trying to harvest coral can be stung by Seadra’s poisonous barbs. This Pokemon has good abilities for hiding. It is also good at hunting. To catch prey, Seadra makes huge whirlpools by spinning its body.

Seadra is weak against Grass and Electric types of moves, so they are preferable to use when fighting it.

Tip 2 from Pokemon Quest walkthrough guide: Your team’s formation changes according to your close- and long-range attackers. Pokemon in front are easily hit by enemies.