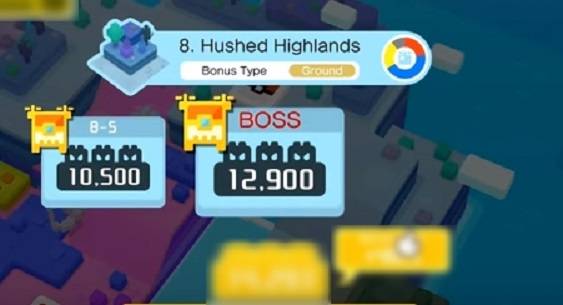 With four waves to clear and two opponents at the final stage, the eighth Boss level becomes a tough task for your team. You can use different effects or avoid your opponents to use such against you to succeed more from your expedition.

Tip 1 from Pokemon Quest walkthrough guide: There is an effect of Freezing in the Pokemon Quest. When Pokemon are frozen, they are unable to move for a little while.

So after passing three waves get ready for the real fight. Nidoking and Nidoqueen are two boss Pokemon to beat at the final of the eighth level.

Nidoking is a dual-type Poison/Ground Pokemon. It is bipedal, large, purple reptilian-looking creature. On a forehead, it has a venomous horn. A long powerful tail can easily constrict or smash an enemy.

Nidoqueen belongs to the same type. It’s a female Pokemon of a blue color. Hard scales on its body protect Nidoqueen from attacks. It has the powerful tail as well.

To defeat both of the bosses, you can use the same type of moves. These are Ice, Water, Ground, and Psychic moves.

After beating Nidoking and Nidoqueen, you will discover The Burning Mane Statue. Your Pokemon up to Lv. 40. The statue is carved at the shape of Rapidash. With the power of Rapidash, which is fire incarnate, even furiously raging fires could be controlled.