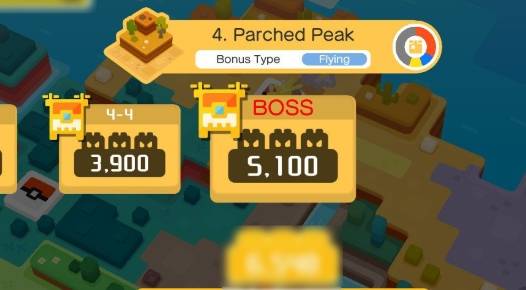 The last stage of the level is traditionally the hardest to pass. You need to clear three waves before you meet the boss of the Parched Peak.

Tip 1 from Pokemon Quest walkthrough guide: The stronger the enemy, the more powerful Power Stones you might get from him.

This time you need to deal with Machamp, a Fighting-type Pokemon. It has a large humanoid body, powerful muscles on arms. Moreover, it has four arms to deal more damage to the foes.

These four arms allow Machamp to hit from the multiple angles and punch extremely fast. Its arms are so steady that it can even move a mountain with one hand.

Tip 2 from Pokemon Quest walkthrough guide: You can use the scatter button, you can give your team members the order to put some distance between themselves and enemies.

How to be the best at Pokémon Quest: the beginner’s guide to the game There is no rest for the wicked and Nintendo, after releasing the free Pokémon Quest&nbs... Details How To Learn New Moves In Pokémon Quest In Pokémon Quest, you're supposed to help your little monster learn some special Moves. Thes... Details Pokemon Quest Evolution Chart Guide Pokemon Quest is the game that pushes on you to constantly develop your team and each of its member.... Details
We use unpersonalized cookies to keep our site working and collect statistics for marketing purposes.
See the Privacy and Cookie Policy here.