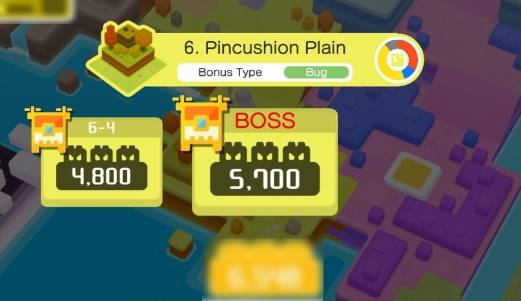 In the Poke Mart, you can buy decorations for gaining different in-game effects or increase your Pokemon catch rate, and so on. You can also find here precious Power Stones which allow the Pokemon to use special abilities. Find in the Poke Mart something new to beat a powerful Pokemon boss.

Tip 1 from Pokemon Quest walkthrough guide: You seem to be able to get PM Tickets regularly as a service for Poke Mart members. You can also pass certain quests (Main and Challenge) that will grant you PM tickets as a reward for the victory in a competition.

At the final stage of Pincushion Plain level, you need to clear three waves before colliding with the boss. Alakazam is a Psychic-type Pokemon. It has a head incredibly heavy due to the weight of its brain. To hold its head, Alakazam uses psychokinetic power.

To bring more damage Alakazam, you need to use Bug, Ghost, and Dark types of moves.

Tip 2 from Pokemon Quest walkthrough guide: Effect of Paralysis When Pokemon are paralyzed, they sometimes become unable to move for a little while

At the end of the level after beating Alakazam, you will discover the Abundance Statue carved in the shape of Tangela. This is the sixth statue from the ten Chamber of Legends statues at all. Soon when you find out all the statues you’ll get an opportunity to enter the Chamber of Secrets. There is incredibly awesome loot within its walls.

From the moment you discover the sixth statue, your Pokemon are up to Lv. 30 and can get increased Exp. from expeditions.