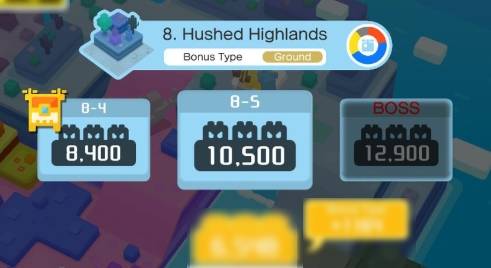 The fifth stage in the Hushed Highlands will bring you four waves of Pokemon attacks. You must have 10500 of the Team Strength to pass the stage 8-5 successfully.

You can make purchases on the Poke Mart on collected PM Tickets. This will help you to benefit from effects which different goods can give.

Tip 1 from Pokemon Quest walkthrough guide: The Victreebel Golf Bag increases the chances that Pokemon with multi-sockets come to visit.

If you cleared three waves and still have enough Team Strength, then meet the boss of the fifth stage. It is a Fairy-type Pokemon Clefable. In the majority of cases, Clefable is a female Pokemon.

You will easily recognize it by the pink star-shaped body and light moves. With its bouncy step, Clefable can even walk on water.

This Pokemon is very timid, and it is one of the rarest Pokemon in the world. It likes it on peaceful moonlit nights.

Despite its demurral, you should fight peaceful Clefable. Better do it with Poison and Steel types of moves.

Tip 2 from Pokemon Quest walkthrough guide: It looks like MoBee IV is apparently recharged by sunlight.