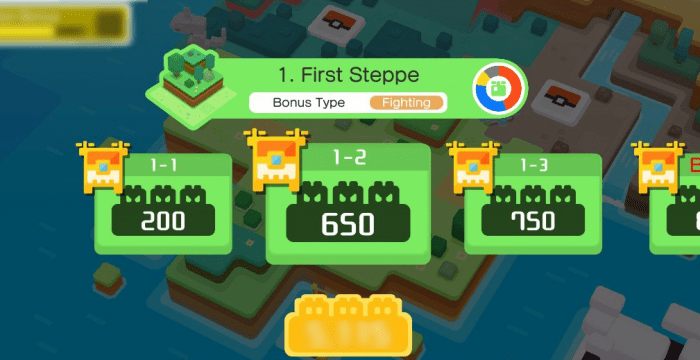 First Steppe 1-2 is still a part of the tutorial, so you can only handle your Pokemon moves, but you don't have any control over which Pokemon you bring. Your team already consists of three Pokemon: your starter Pokemon, Pidgey, and Rattata.

The total of your team members’ HP and ATK is your team’s strength. At each spot where you can head out an expedition the strength of enemies will be displayed. This should give you an idea of what your team’s strength should be. Pokemon with the same type as the bonus type for the place you are heading out on an expedition to will have higher HP and ATK than normal, making them stronger than they usually are.

In 1-2, you'll have to fight off three waves of Caterpie and Weedle. These wild Pokemon are rather easy to defeat by using your Pokemon's attacks. The final and third wave has a Metapod surrounded by additional Caterpie. Use your starter Pokemon to deal massive damage to the Metapod with its moves.

Tip from Pokemon Quest leveling guide: Your starter Pokemon is especially strong now, so use its moves to clear out Pokemon quickly when your team is surrounded.