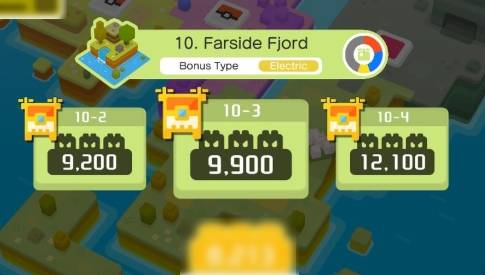 Between your expeditions take time to progress in the in-game quests.

Tip 1 from Pokemon Quest walkthrough guide: You can also receive PM Tickets as a reward for completing quests.

At the stage 10-3, you need to clear three waves of wild Pokemon before meeting the boss with the fourth wave. This is Seaking, a Water-type Pokemon evolving from Goldeen.

Seaking is a large fish-looking Pokemon of an orange color. Despite the word “king” in its name it can be female as well as male Pokemon. It’s a good swimmer which can be found in rivers and streams.

In Autumn, male Seaking Pokemon are wooing females. This is the season when they have the most bright and beautiful coloring.

To beat Seaking Pokemon, you need to apply Grass and Electric types of moves against it.