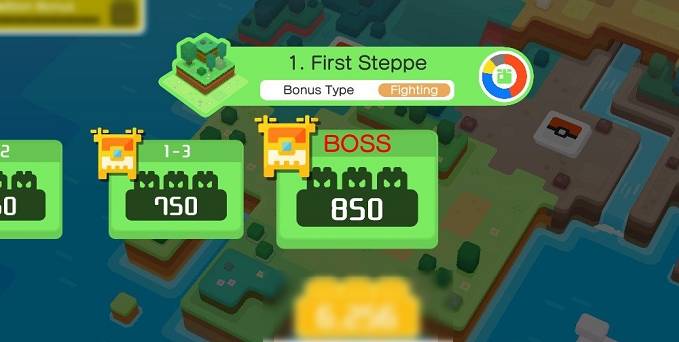 On First Steppe 1-Boss, the expedition starts off with Doduo and Pidgy. The next wave is rather insidious. A single Spearow waits for your attack then calls for help. And a lot of support comes. Use Pokemon moves with a bigger area effect to clear out the Spearow flock quickly.

The third wave has a few Doduo that shouldn't vie you too much of a problem followed by Meowth and Rattata.

With the last wave, the boss of First Steppe appears. And it would be a large Raticate. Use all your moves to make this a fast boss battle. A few Rattata will join the fight too, but they go down quickly.

Tip from Pokemon Quest leveling guide: Your Pokemon should be close enough to Rattata, or their moves can miss.

After the final fight, it seems that you’ve explored everything there is to explore in this area, and the route will be located to the next area. The First Steppe is finished.