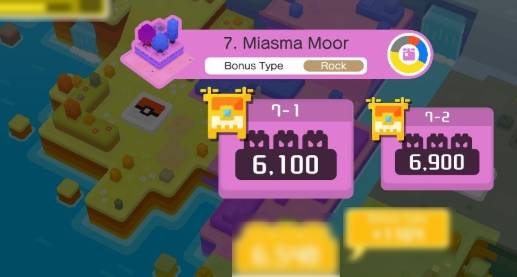 New pinkish-violet area of Miasma Moor opens before the eyes of your Pokemon at the seventh level. This time, you need to pass five stages before encountering the main boss of Miasma Moor.

At the stage 7-1, you need to clear three waves overall. Besides, you can use MoBee IV’s hidden features in your expeditions.

After passing two waves of wild Pokemon, you are going to deal with Venomoth. It is insectoid-looking creature evolving from Venonat. You will recognize it by a purple-colored body with two pairs of wings. The latter are covered with poisonous dust that has a toxic capability.

Venomoth is a nocturnal Pokemon and belongs to a Bug/Poison type.

Use Venomoth weaknesses to defeat it. Considering its type, you should use Flying, Fire, Psychic, and Rock types of moves to bring more damage.

Tip 2 from Pokemon Quest walkthrough guide: Inside scoop on MoBee IV. When MoBee IV price came down, the capacity of the standard model’s battery was apparently decreased.

Pokemon Quest Rewards Guide One of the essential features of Pokemon Quest is the possibility of being rewarded for successful p... Details Pokemon Quest Power Stones Guide When it comes to leveling up Pokemon at Pokemon Quest, we come across such in-game terms like Power... Details How to be the best at Pokémon Quest: the beginner’s guide to the game There is no rest for the wicked and Nintendo, after releasing the free Pokémon Quest&nbs... Details
We use unpersonalized cookies to keep our site working and collect statistics for marketing purposes.
See the Privacy and Cookie Policy here.