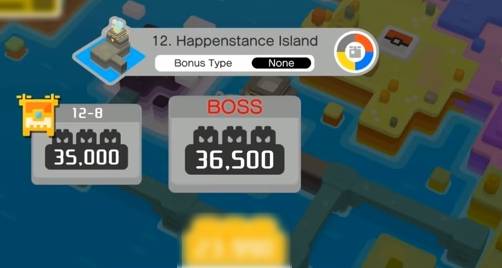 And finally, the last level of the Happenstance Island and Pokemon Quest as well! We recommend you to prepare as good as it is possible for the final fight. To reach the final boss is not a piece of cake again as you need to beat four waves of Pokemon at your way.

Before starting the last expedition, you can increase your chances by spending PM Tickets on different stuff from the Poke Mart. This could be decorations or Power Stones or anything else that can help your team.

Tip 1 from Pokemon Quest walkthrough guide: Decorations from the Poké Mart have effects that will help you on your expeditions.

You can use any of the effects available. For example, use Meowth Balloon’s Effect or Squirtle Flag Effect. They both increase the amount of ingredients you can get from recycling.

You can also do some Level-Up Training to boost your Pokemon before the final fight.

Tip 2 from Pokemon Quest walkthrough guide: If you do Level-Up Training with the same species of Pokémon, the amount of Exp. you get seems to increase.

Pay attention to the tiniest details of the game. You must have noticed that even Pokémon of the same species have Power Charms and the moves which are slightly different from each other.

So you cleared four waves of wild Pokemon, then it’s time to encounter the final boss. There is a great possibility that your team is going to fight with Mewtwo. Remember your fierce battle at the Chamber of Legends level? Then probably it is time to be more nimble and thought-out against this enemy.

Mewtwo is a Psychic-type Pokemon created by science. It has no gender and has both feline and humanoid features. Mewtwo is said to have the most savage heart among all of the Pokemon.

Mewtwo is a Legendary Pokemon, so you need to choose the correct tactic fighting with it. To beat Mewtwo you need to select an optimal Pokemon team and the Movesets. To be the most effective, use Bug, Dark, and Ghost types of moves.

When Mewtwo is finally defeated, Pokemon Quest is over.

Is it possible to encounter another final boss in Pokemon Quest? Our answer is “perhaps.” And the more progress you gained during the game, the more chances you will have to fight any of the boss Pokemon.